The excitement started on Monday when a group of lucky Year 6 children travelled into London to attend the Commonwealth Day Service at Westminster Abbey, in the presence of Her Majesty the Queen, other members of the Royal Family and assorted dignitaries.  Every year schools are given the opportunity to apply for tickets for this prestigious event, and this year, we were fortunate enough to be allocated ten tickets, meaning that Mrs Slatter, Mrs Young and eight children, chosen by ballot, were able to attend. 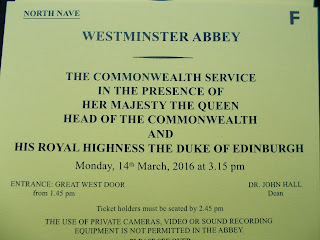 They travelled in to London by train and underground, and had the chance to do a bit of sightseeing, and watch the Changing of the Guards at Buckingham Palace,before the service.  It was a beautiful day, so they were able to experience London at its best.

In the afternoon, they made their way to the Abbey to take their seats, and had a fine view of the royal party as they passed almost within touching distance!  Meanwhile back at school, we also had a fine view of what was going on, as the event was televised, and streamed live on BBC i-Player.  It was very exciting for us in Eaton Bray to spot our children and staff in such distinguished company! 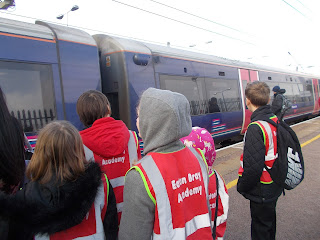 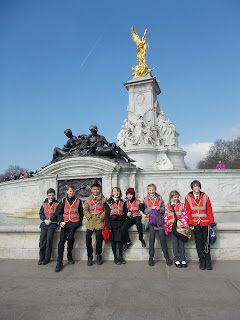 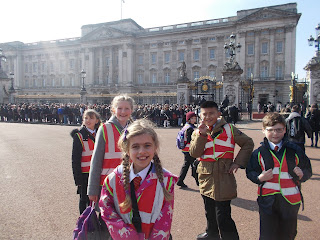 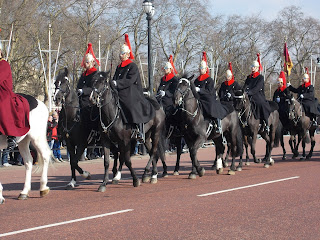 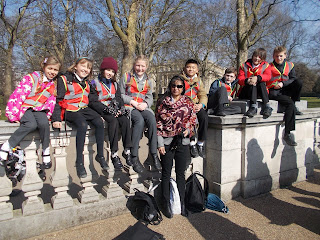 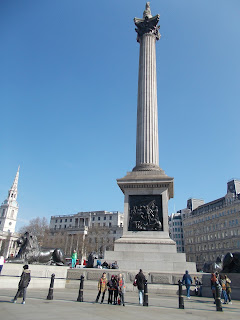 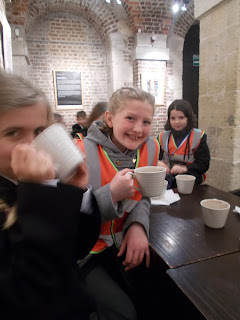 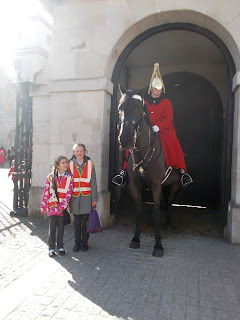 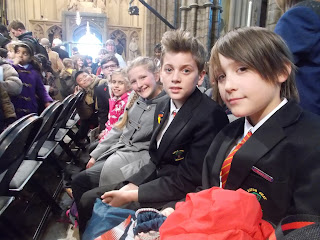 Back in Eaton Bray, the remaining Year 6 children also enjoyed a treat, in equally honourable company - an Enterprise celebration lunch at the Cafe Masala, with Mr Wallis and Mrs Cooney, who have helped with all their projects this term. 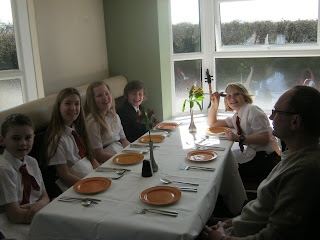 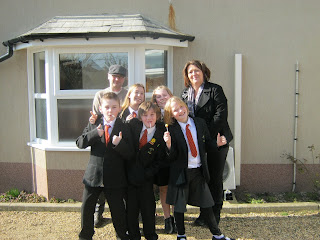 It was National Science Week this week, and each class has been enjoying a variety of scientific activities.  Children in Hedgehogs and Key Stage One investigated chemical reactions using vinegar and bicarbonate of soda.  By mixing the two substances together and pouring them into a medical glove, they were able to make "magic hands" that rose into the air!

Children in Rabbits Class conducted an investigation into toast, and did experiments to determine whether when dropped it will always fall butter side down.  They concluded that it usually will when dropped from a low height, but there is a more random pattern when toast is dropped from a greater height!

Badgers Class went pond dipping on a sunny afternoon, and found that the school pond was teeming with all sorts of life! (The heron is not real though...) 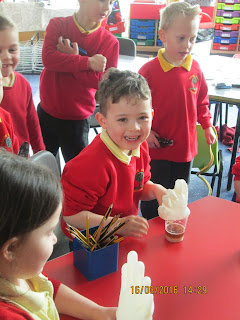 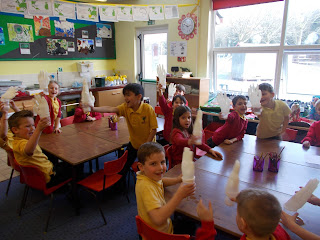 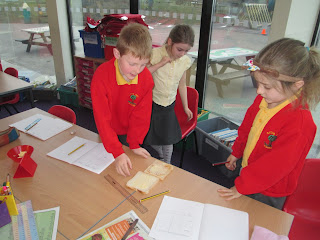 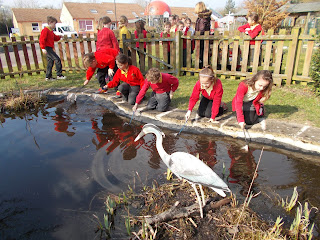 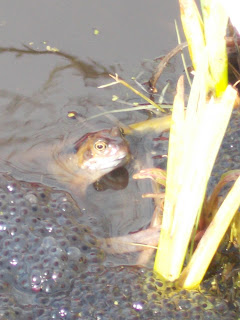 On Tuesday evening there was a Governors' meeting with a difference.  This time, two of our children were invited along, and given the chance to present to the Governors their view of Eaton Bray Academy, and their suggestions for the future development of the school.  They spoke up well, and put across some very interesting ideas, which will be given due consideration by the governing body. 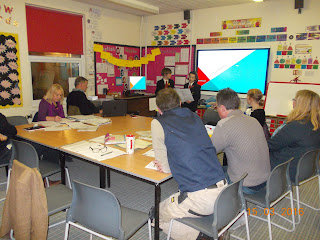 Monday, Tuesday and Wednesday were busy days, with Parent Consultation Evenings taking place.  The teachers managed to speak to most parents over the course of the week, and we hope that everyone who came in found it a useful exercise.

Year 5 Enterprise children had a visit from the local butcher on Wednesday afternoon.  Mr Hines came in to talk to them about sausages, and explained to them the process and ingredients required to make the specialist sausages sold in their shop.  The children then got the chance to taste them! 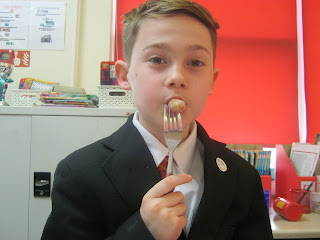 On Thursday evening, the HSA hosted a Bingo and Quiz Night for children in Years 4,5 and 6.  Everyone thoroughly enjoyed themselves vying to be the first to get a "full house", and were keen to show off their general knowledge (or lucky guesswork) to answer the quiz questions.  There was a delicious buffet tea on offer, and all the children went home with an Easter Egg.  Thank you to the HSA committee for once again organising such a fun event for the children. 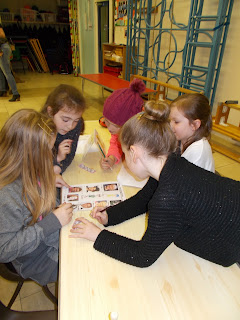 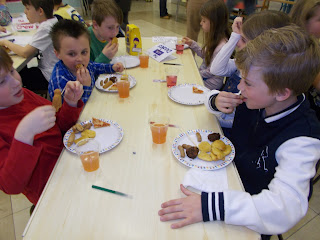 Friday was a fun fundraising day - it was "Onesie Friday", where everyone was allowed to come into school wearing their onesie, pyjamas or non-uniform in return for a £1 donation to the National Autistic Society.  There was also a cake sale after school with all proceeds going to the same charity.  Thank you to everyone who supported this by donating and/or buying cakes.

The day was made extra special for some of our Year 6 children, because they had a visit from Mr Button, the Head of Queensbury Academy, the secondary school to which many of them will be going next year.  He came for lunch and sat and chatted with the children in the "party room".  They all really appreciated the chance to meet him again and we are grateful to him for giving up his time to come and get to know our children. 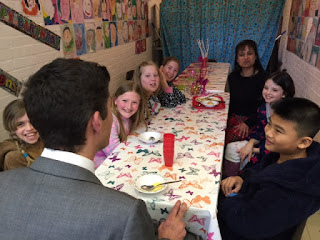 There was also a special surprise for Hedgehogs Class on Friday - a reply from Buckingham Palace to the letter they sent to the Queen last month!  They received a lovely letter from one of the Queen's Ladies-in-Waiting, thanking them for their kind thoughts for the Queen's 90th birthday.  We feel very honoured to have started and ended the week with a royal connection! 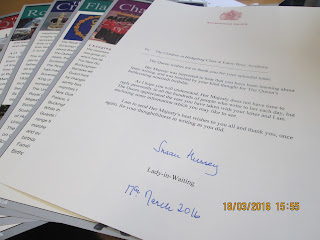 Friday afternoon marked the end of Science Week, and we chose to end it with a "bang!"  Mrs Johnson from Sam's Simple Science came in to help us with some explosive science on the field.  Thirty bottles of cola were lined up, and thirty children given waterproof capes to wear.  When the children added Mentos, the cola exploded in a sea of fizzy foam - thirty times over!  A fun way to end the week. 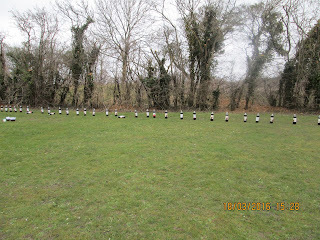 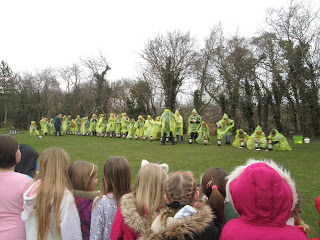 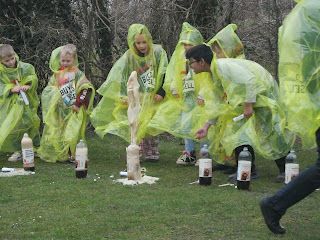