On Monday, we had a visitor who told us about electricity and safety. There were lots of practical things to do, and a fun film as well.

Wednesday was a day for more science... the first session of After School Science Club. Hopefully we will have a few budding scientists from Eaton Bray Academy, in the future.

This week, younger children had fun going to Spain, on the aeroplane. They visited Barcelona, and sampled fresh oranges and juice, which was most refreshing, after flamenco dancing. The visit ended at Gaudi's Park, and we tried to make mosaics and lizards in his style

Year 2 children went to China, and we had a fierce dragon dancing round the School!

Otters went back in time to 1666, and the Great Fire of London. They designed some wonderful timber framed houses, and wrote eye witness diaries of the scene from their window as the Great Fire raged. 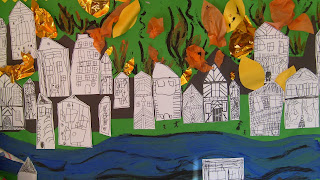 Older children have been looking at Roman times, creating Roman mosaics, and drawing Roman legionaries. They have also been doing lots of singing in preparation for their concert next week.

Dates for your diary: