The week ended with a day of "African Drumming." There was a whole School assembly, followed by exciting work shops for each class throughout the day. The children were acting like professionals by the end of the visit! 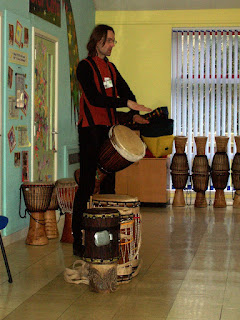 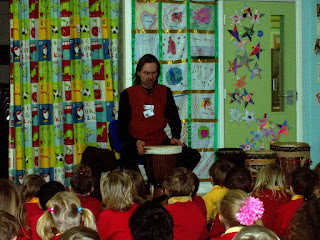 Badgers had two visitors mid week, who talked about their evacuee experience in World War II, and shared artefacts.
Rabbits had a Powerpoint presentation by a parent who had completed a trek up Kilimanjaro, and were all kindly treated to gifts.
Squirrels have been investigating changes in materials, causing the first aiders to wonder why there were strange items in the freezer, along with the ice packs... Squirrels, were of course, discovering how materials change their properties when frozen.
Otters have been comparing and contrasting their present day habitats with those of prehistoric dinosaurs.
Hedgehogs and Hamsters have had lots of fun on the new climbing frame, magic mirrors and blackboards. In case any of you have noticed a "Teletubbies" hill, which is now fenced off, watch the space, and all will be revealed, in a short time!
Future dates:
23rd March: Bring an Animal (£1)
23rd March: Sponsored Sports Relief
26th March: Consultation Evening and Talk (5.00 - 7.30pm)
27th March: Sharing Assembly
30th March: Games Day
Posted by Eaton Bray Academy at 02:12
Newer Post Older Post Home